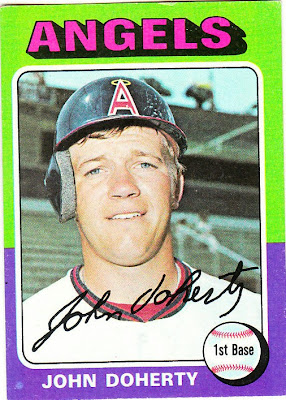 Card fact: This is the only card of John Doherty issued by Topps during his career.

What I thought about this card then: I had the mini card. He reminded me of Moose from the Archie comic books. Who didn't read Archie when they were a kid?

What I think about this card now: That is one impressive display of the single ear-flap helmet.

Other stuff: Doherty's major league career lasted just two years, 1974 and 1975 with the Angels. He was a part-timer first baseman and outfielder. He played in 74 games in '74 and just 30 games in '75. In 1977, he was traded to his hometown Boston Red Sox, but never played in the majors for them.

Doherty is one of two people named John Doherty to play in the majors. The other is pitcher John Doherty, who played for the Tigers in the mid-1990s. I interviewed pitcher Doherty many times during his first year of pro ball in Class A Niagara Falls. I believe the first time I saw him on the roster that year, I thought of the card of first baseman Doherty. Then I probably immediately looked to see if they were related. They aren't. 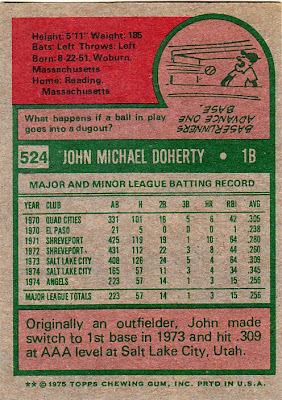 Back facts: Nothing like seeing a liner screaming toward you in the dugout.

Other stuff: On this date in 1953, Babe Ruth League baseball became known by its current name. It used to be called the Little Bigger League.
Posted by night owl at 1:05 AM

Speaking of little league, Doherty's helmet reminds me of the ones we wore as kids. That's some thick padding. Of course, ours were double-flapped and had an elastic strap under the chin. Even less fashionable.

Is that Don Zimmer in the dugout?

Don't get me wrong, if I could get one Topps card, I'd take it however they made it, but that's not a great card. He looks a little constipated.