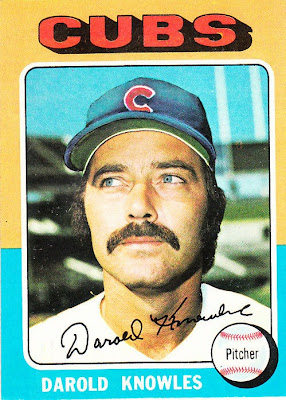 Card fact: Back on this post, I mentioned that the first card I ever pulled from a pack of cards that I bought was either the Hal McRae card or another card. This is the other card. If I was forced to make a decision between the two, I'd say this is the card that I pulled first. But I really can't recall.

What I thought about this card then: Well, no doubt, I thought it was cool if it was the first card I ever pulled. I do know that I had no idea that Darold Knowles was airbrushed into a Cubs cap (while in the Oakland A's stadium).

What I think about this card now: I can't believe I had this card for so long before realizing his cap was airbrushed, especially since the look on Knowles face seems to indicate that he's pulled a fast one. "I wonder if they'll be able to tell that I'm wearing a fake Cubs cap," he seems to be saying.

Other stuff: Knowles was a much-traveled relief pitcher who found his niche with the Oakland A's dynasty of the early 1970s. After playing for the Orioles, Phillies and Senators, he was traded to Oakland in the middle of the 1971 season. He became a key part of the bullpen, used mostly to set-up reliever Rollie Fingers.

Knowles' effectiveness declined a little in 1974, and after the season he was sent to the Cubs in a package deal to acquire Billy Williams. A couple years later, he was sent to the Rangers. He played for the Expos and Cardinals to close out his career. He later worked as a coach for the Cardinals and Phillies. 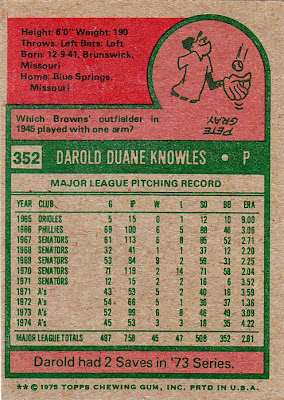 Back facts: The cartoon question doesn't specify why Pete Gray played with one arm, but the cartoon certainly illustrates it. I remember finding this cartoon kind of shocking when I was a youngster.

Other blog stuff: Here it is: Maybe, possibly, the first card I ever pulled from a pack of cards: 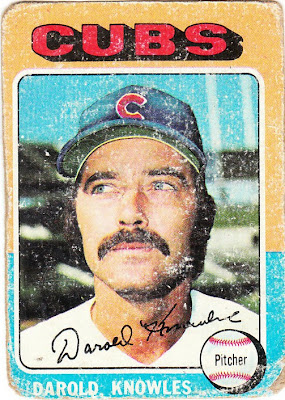 (EDIT: I have since become completely certain that this is the first card I pulled out of a pack that I bought).
Posted by night owl at 2:06 AM

I think I might have a Senators card of his. Maybe.

I swear he looks just like an umpire in my kid's Little League....league.