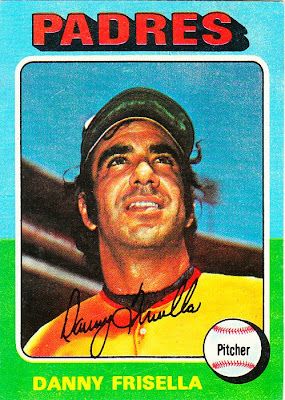 Card fact: Danny Frisella is airbrushed into his Padres uniform. He seems to be wearing a Braves cap, as Atlanta was the team he played for before he was traded to San Diego for Cito Gaston in November of 1974. The pose on this card looks like his pose on this card, although he has a lot more hair here.

What I thought about this card then: This was one of those card we really disliked as kids, one of the 7 or 8 cards that we tried to slip into other collectors' card stacks and hope they didn't notice. In fact, I think this was the original  "Oh, no, It's Him" card, because this was one of the first cards I saw from the 1975 set.

What I think about this card now: I think the reason we didn't like it is because of the horrible airbrush job, and how Frisella is looking to the sky.

Other stuff: Frisella was a career reliever, mostly with the early '70s Mets teams, but also with the Braves, Padres and Brewers. Even though New York was a perennial contender in the first half of the '70s, Frisella never pitched in the postseason, since he barely pitched in 1969 and he was shipped to the Braves before the Mets' 1973 pennant-winning season.

Frisella was killed in a dune buggy accident near Phoenix, Ariz., during the offseason on Jan. 1, 1977. It was the first time I had ever heard of a player dying during his major league career. Frisella was still featured in the 1977 Topps set as the cards had already gone to press by the time of his passing. 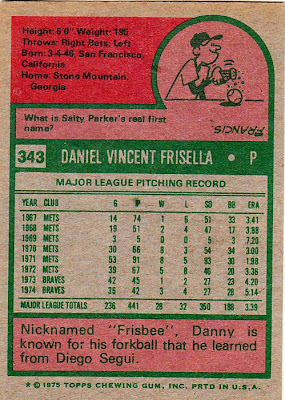 Back facts: Francis "Salty" Parker played all of 11 games for the Detroit Tigers in 1936. I hardly think he merits a cartoon.

Other blog stuff: On this date in 1975, the movie "Benji" was released. Wow, that dog was popular when I was a kid. Benji folders. Benji notebooks. Benji book covers. I've still never seen that movie.
Posted by night owl at 2:39 AM

You've never see Benji? That was right in my wheelhouse as a kid. Don't worry though, I watched it enough for both of us.

I didn't know anything about Frisella before. It's too bad about the dune buggy accident.

He had some wild, scary hair.

I remember the dune buggy incident too. That impacted me in a similar way.