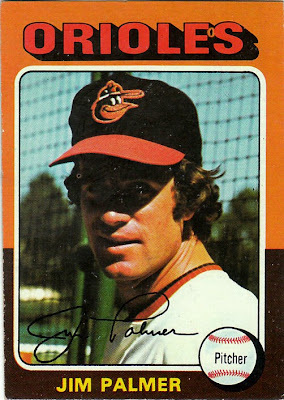 Card fact: You could tell me that the border colors were selected totally at random, but I would refuse to believe you when it comes to this card. I am saying that it is a FACT that Topps chose the orange-and-brown border for the Jim Palmer card because it would look so cool.

What I thought about this card then: I know I saw it, and I know I thought it was one of the greatest cards in the set, but I can't remember who had the card. I know it wasn't me.

What I think about this card now: Probably one of the top 10 cards in the set in terms of summing up the 1970s. You've got a close-up of a '70s matinee idol, displaying the cartoon Oriole front-and-center, with his face covered in shadow. It's '70s perfection.

Other stuff: The Hall of Fame pitcher was consistently the best pitcher in the American League throughout the 1970s. In fact, the 1974 season that immediately preceded this card was his only real down year. He suffered through elbow problems during the season, pitching just 178 innings and winning seven games.

Palmer didn't get a lot of respect from me during his career as I've documented before. I rooted against him a lot.

What? You expect me to document his 1966 World Series appearance against the Dodgers? Not here, man. 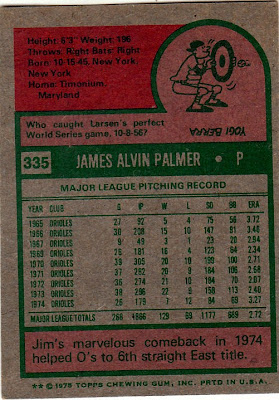 Card fact: I missed the anniversary of the achievement mentioned in the cartoon by one day.

I'm not sure what Topps means by "marvelous comeback." Going back through the records, it looks like Palmer disappeared from the Orioles' rotation between mid-June and mid-August in 1974 because of his elbow issues. When he came back, he did produce a few key victories, including a shutout of the Red Sox on Sept. 4 and another shutout of the Yankees on Sept. 17. He also pulled out a narrow 3-2 victory against the Royals on Aug. 31. But there were some losses mixed in there, too, going down the stretch.

Palmer's one postseason start in 1974 resulted in a 1-0 loss to the Oakland A's in Game 3 of the ALCS. He allowed just four hits, but Oakland's Vida Blue allowed just two.

Other blog stuff: It's official. the brown-orange color combo (not to be confused with this card's orange-brown combo) will be known as the "Reese's Peanut Butter Cup" combo. All 18 of the color combinations now have been named.

During one post in the future, I'll feature all the names again and see if any of them need to be renamed.
Posted by night owl at 3:01 AM

That is a nice looking card. Another problem with the "marvelous comeback" is that it didn't help the O's to a 6th straight East title. The Tigers won the east in 1972. The O's won five titles in six seasons.

Even after his off year in '74, it seems a bit harsh that Topps only gave Palmer an xx5 number in this set. Every year of his career after this, I believe that he had at least an xx0 number, sometimes an x50 or x00.

Palmer and Seaver were my two favorite pitchers of the 70s.

You know, I always thought he was one of the most arrogant players turned announcers...

Palmer got the best of Vida Blue eight years later, on the day I was born.

That is a great card. It's interesting that the Larsen cartoon would come up so close to Halladay's no-hitter.