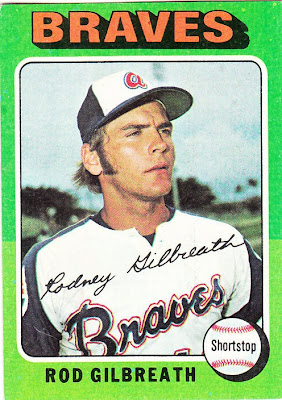 Card fact: This is the second of six Topps cards that Rod Gilbreath had during his career. The positions he played according to the designation on each Topps card were as follows:

I don't know why I thought that was interesting to list. But I did.

What I thought about this card then: The spacing between the letters in Gilbreath's name isn't as prominent as it is in the Marty Pattin card. But it was noticeable enough to me as a kid that it bothered me a little.

What I think about this card now: That uniform and those sideburns just scream the '70s.

Other stuff: As illustrated above, Gilbreath was a middle infielder for the Braves in the 1970s. After coming up to Atlanta in 1972 as the second-youngest player in the major leagues, he was in the majors to stay by 1975. He became the regular starting second baseman for Atlanta between 1976-78. The Braves were perennial basement dwellers at that time, happy to have players like Pat Rockett and Junior Moore patrolling the infield. Gilbreath wasn't terrific either, barely hitting .250.

After 1978, Gilbreath was released, and acquired by the Pirates. He never returned to the majors. He eventually coached in the Braves' minor league organization and then became Atlanta's director of minor league operations. 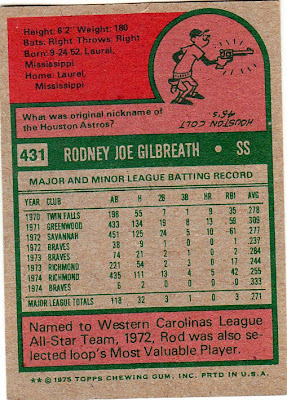 Back facts: It's been awhile since we've had an armed cartoon character on the blog. Good to see cartoony packing heat again.

Other stuff: Here is the Gilbreath card that I pulled out of a pack back in 1975: 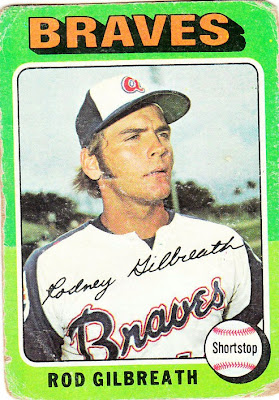 What catches my eye is the space between the A and T in his last name.

So we go from a kitten on Tiant's card to a pistol-packing cartoon. Topps was all over the place. Thank goodness they kept them off the same cartoon.