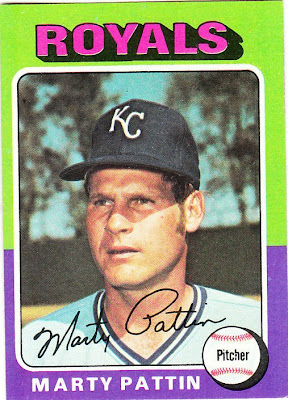 Card fact: This is the first green-purple bordered card in 67 cards. This is another color combo that I thought would contend as the top border combo. But like purple-pink, it has fallen off quite a bit.

Other stuff: I equate Pattin with the Royals, where he spent the final seven years of a 13-year career. But he started out with the Angels, and then became an original Seattle Pilot. He is mentioned a few times in the book "Ball Four." When the Pilots moved to Milwaukee, Pattin became an All-Star with the Brewers.

Pattin was traded to the Red Sox in the big deal that landed George Scott for the Brewers. He won 32 games in two seasons for the Red Sox, then was dealt to Kansas City for Dick Drago. With KC, his role changed as he split between starting and relieving. He pitched in the postseason in four years for the Royals and his final appearance as a major leaguer was throwing a shutout inning against the Phillies in the 1980 World Series.

Pattin later worked as the head coach for the University of Kansas during the 1980s. 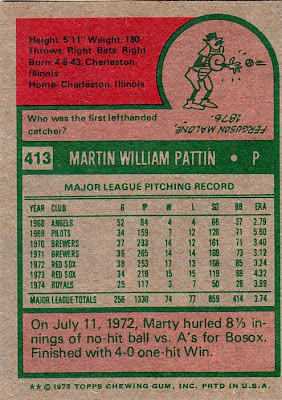 Back facts: Reggie Jackson broke up Pattin's no-hitter on July 11, 1972. He singled after Joe Rudi struck out.

Other blog stuff: Two 1970s actresses that I constantly confuse were born on back-to-back days. Dyan Cannon was born on Jan. 4th and Diane Keaton on Jan. 5th.
Posted by night owl at 3:28 AM

If Malone was the first left-handed catcher, who was the last one? Mike Squires?

I waited over 24 hours and still couldn't think of anything to say about this card. Thanks to the comments, I can say...yay Distefano!

When I opened up the post and looked at the picture of the card, the first thought that came into my mind was, "the letters in his name don't look right"....