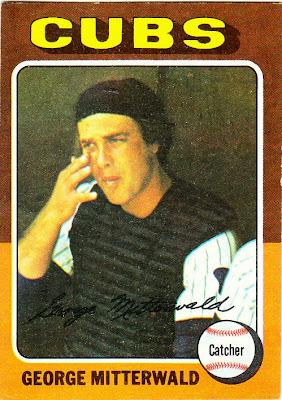 Card fact: Another dugout shot! This is the first card of George Mitterwald as a Cub (I refuse to count that traded thing in 1974). It also might be the only card of a player rubbing his eye, or inserting a contact, or whatever he's doing.

What I thought about this card: Didn't see it.

What I think about this card now: I'm fairly certain that is the Cub logo on Mitterwald's left sleeve. For a minute, I thought Topps was trying to disguise the fact that Mitterwald was wearing a Twins uniform, but the Twins didn't wear pinstripes in the mid-1970s.

Other stuff: Mitterwald, nicknamed "Baron von Mitterwald," was a middling catcher for the Twins and the Cubs. He played most of the games behind the plate for Minnesota in 1970, 71 and 73. When he was traded to the Cubs for Randy Hundley in the offseason, his playing time declined, even though he began his Chicago days with a bang.

In April of 1974, Mitterwald hit three home runs, including a grand slam in an 18-9 victory over the Pirates. He drove in eight runs. According to this report, he did it with a hangover.

Mitterwald didn't hit much after that and his career was done after the 1977 season. He became a manager in the minor leagues and was manager of the Duluth-Superior Dukes when Ila Borders became the first female professional pitcher with the team in 1997. 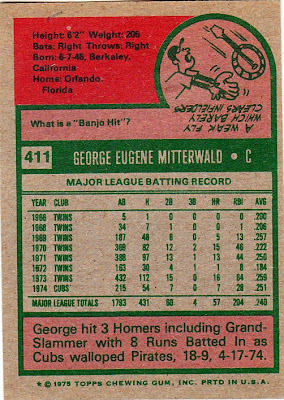 Back facts: I've never heard of a banjo hit. The fielder looks absolutely freaked out.

Other blog stuff: On this date in 2003, it was announced that the Baseball Hall of Fame game between major league teams would take place on a different weekend than the Hall of Fame induction ceremonies for the first time in history. The reason was because of a conflict in the major league schedule. It marked the beginning of the end of the Hall of Fame game, which eventually became a casualty of MLB's schedule-tinkering and  teams' unwillingness to play an exhibition in midseason. Too bad.
Posted by night owl at 12:36 AM

I like it..vintage catcher in his gear. Works for me, although my son, who has exactly two little league games at catcher under his belt, already has a better chest protector than that one. I've also never heard of a banjo hit, but I wouldn't want to catch a banjo.

The context in which I've heard of a banjo hitter would indicate that he has no power, as if he were hitting a ball with a banjo rather than a bat. That was always my understanding.

This was one of my fave (probably top 10) cards from the '75 set. I think I still have this one somewhere.

Here are some other unlikely "action shots" that you might enjoy:

Many times I heard the term "banjo hitter" but I don’t remember hearing "banjo hit". Mitterwald was kind of a banjo hitter, but he hit too many home runs for the term to really fit. Banjo hitter was someone like Bud Harrelson–hit about .240 with no power, but not so bad you couldn’t play him every day, so a better hitter than Ray Oyler.