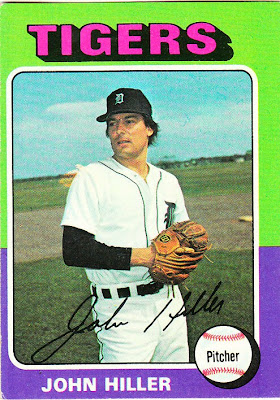 As mentioned before, the John Hiller card was one of three Tigers I pulled in that pack.

What I thought about this card then: Well, I thought it was amazing. Looking at the card now, I have no idea why, but it was a real favorite.

What I think about this card now: Still trying to process why it was such a favorite.

I didn't know it at the time I pulled this card, but the most amazing part of Hiller's career is he suffered a heart attack just a few years into his major league career. In January of 1971, Hiller had the heart attack and it sidelined him until mid-season 1972. In view of that, his 1973 season was phenomenal and he won Comeback Player of the Year honors.

Hiller played with the Tigers his entire career up through the 1980 season. A native of Ontario, Canada, Hiller was inducted into the Canadian Baseball and Sports halls of fame. He lives in Michigan. 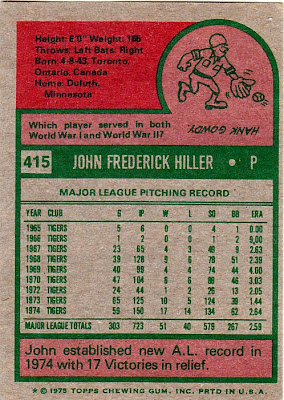 Back facts: Look at that won-loss record in 1974 -- 31 decisions in relief! That'll never happen again.

Also, Hank Gowdy played for 17 seasons between 1910-30, mostly for the Boston Braves.

Other blog stuff: Ross Grimsley, one of baseball's true characters of the 1970s, was born on this date and is 61 years old today.
Posted by night owl at 12:43 AM

Ross Grimsley made my early post yesterday! How many good pitchers never win 17 games in a season and he won that many in relief? The Tigers had a lot of comeback victories.

That '74 season was a wild ride for Hiller.

Here was the issue.

The thing is, he was phenomenal in 1973 and was pretty good in 1974 looking at his peripherals. It was just one of those wacky baseball things.

Like May 2, 1974. Tigers up 8-2. Joe Coleman loads the bases. Hiller comes in. Single, E7 (Horton dropped a fly), Sac Fly, Grounder, single, groundout. Yes he gave up two hits but if Horton catches that fly he only allows one run to score, not three.

And his blown saves weren't just, well, today's blown saves. June 19 at Texas. Coleman (again) pitches six strong innings. Hiller comes in the game in the 7th to nail it down ahead 2-1. (A closer coming in the 7th? Yeah, the way it should be...)

Tigers score two in the top of the 11th to win.

Now, Hiller did blow a save, but he pitched five friggin' innings for the win on one day rest, and came back on June 22 for another win.

One of his losses was on August 27, 1974. Coleman (him again) knocked out in the 6th. Hiller comes in (I swear the Tigers had other pitchers...no...really) and actually gives up three inherited runners in the 6th (one on an error). But Gates Brown drills a homer off of Figueroa and Kaline knocks in the tying run.

Hiller loses, though, on a Bob Oliver sac fly.

Hiller was not a sissy mary, coddled, one inning pussy closer. He was a man's man of a relief pitcher. I think most relievers would bawl their eyes out to their agents because the big bad manager made them pitch 2 2/3 to get the save! Or had them come in down a run in the 7th. What would LaRussa do if he had Hiller?

His nickname was "Scuz", which probably tells you something about his personal hygiene.