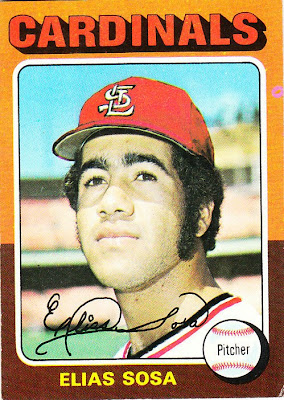 Card fact: Elias Sosa is rocking an airbrushed Cardinals cap while posing in Candlestick Park in San Francisco. He was traded from the Giants to the Cardinals in mid-October of 1974.

What I thought about this card then: Never saw it. I didn't know Sosa until he was a Dodger in 1976.

What I think about this card now: Quite the signature -- loops all over the place.

Other stuff: Sosa was a relief pitcher for 12 seasons with the Giants, Cardinals, Braves, Dodgers, A's, Expos, Tigers and Padres. He started just three of the 601 games in which he pitched. He was your classic relief workhorse, especially with the Giants, A's and Expos in which he averaged 60-70 games a season.

Sosa is probably most famous for allowing the second of Reggie Jackson's three home runs during Game 6 of the 1977 World Series. The 1977 Topps Sosa card was one of the first Dodgers I pulled that year, so I was extra disappointed in Sosa's gopher ball. 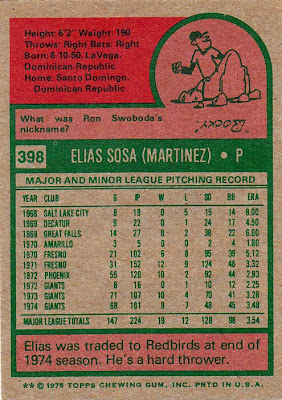 Back facts: You see the mention of the trade on the back. Sosa was actually traded from the Cardinals to the Braves in May of 1975. He pitched just 14 games for St. Louis.

Other blog stuff: This is the 40th orange-brown bordered card in the set. That is six more than the next highest color combo.
Posted by night owl at 1:03 AM

I will always reserve a special dislike for Sosa for being the one that "got away". I can't believe I missed it! Alas, when I had to play catchup so many times, I guess it was bound to happen! The funny part is you must have known all along that I missed it! Thanks for pointing it out so I could "fix" it.