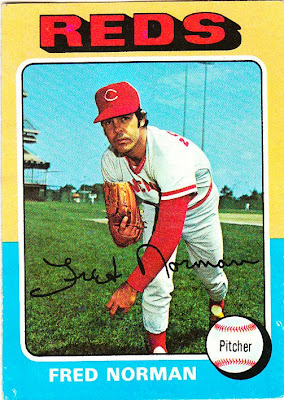 Card fact: Fred Norman's pose on this card is quite similar to the one on his 1976 Topps card. But they were definitely taken at different times as he's featured in different stadiums. Either that or Topps did some cutting and pasting.

What I thought about this card then: I acquired it fairly early in 1975. I still have that card. It has a crease that travels down the center of the card, top to bottom, from the top part of the card to about the mid level of Norman's cap.

What I think about this card now: It's nice. For a Red. A Norman card was once the oldest card I owned. So that's the card I think of when his name comes up.

Other stuff: Norman began in the majors as a 20-year-old pitching for the Kansas City A's in 1962. He ran through quite a few teams before emerging as a consistent starter for the Padres in the early '70s. But Norman is most known for being a starter with the Big Red Machine teams of the mid-1970s. He pitched with Cincinnati for seven years, winning in double figures each year. His final year was with Montreal in 1980. 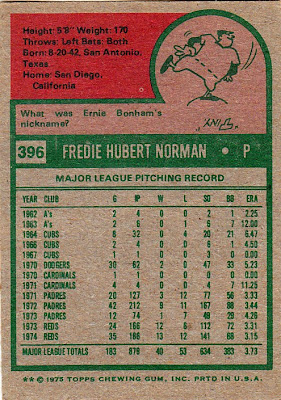 Other blog stuff: Bill Buckner is 61 years old today.
Posted by night owl at 1:15 AM

The first thing I thought of when I saw that card was the stark contrast to the landscape of the Astros cards. Also, a 6'2" guy who only weighed 215 pounds? Maybe we should be calling C.C. Sabathia tiny.