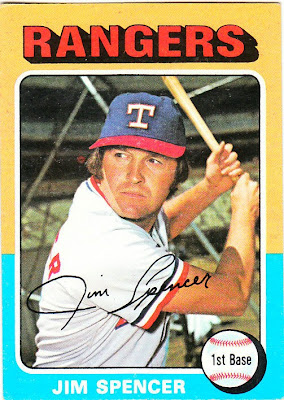 Card fact: It's been a dozen cards since we last saw a bat pictured on one of these cards. That's just too long if you ask me.

What I think about this card now: Jim Spencer looks like he could fill out a cap.

Other stuff: Spencer started out as the regular first baseman for the California Angels in the early 1970s. He was know for his glove -- he won two Gold Gloves -- and could hit a little. He was traded to the Rangers where he started DHing, then went to the White Sox in the Bill Melton deal.

It was during that time that I discovered Spencer. He was part of the Southside Hitmen team, although a relatively small part. But he had 18 home runs in 1977 and I was really annoyed when he was traded to the Yankees for virtually nothing. Spencer played in the postseason for the Yankees in the 1978, 1980 and 1981, and I no longer liked him.

He finished his career with Oakland in 1982. Spencer died of heart attack in 2002. 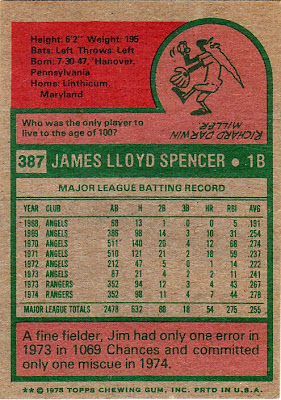 Back facts: According to baseball-reference, Richard Darwin Miller was actually Ralph Darwin Miller. He played in 1898 and 1899 for Brooklyn and Baltimore.

But he's not the only major leaguer to have reached 100 years of age, according to several sources, including this one, which says there have been at least 15 major leaguers to live to be 100. Tony Malinosky, who played a single season for the Brooklyn Dodgers in 1937, is believed to be the only living major league centenarian.

Other blog stuff: On this date in 1978, Pete Rose left the Cincinnati Reds to sign with the Phillies.
Posted by night owl at 3:05 AM

Oh boy, another Rangers card! Any idea where that picture was taken?

That's SHEA Stadium. The Rangers were playing the Yankees. The Yanks played in Shea during Yankee Stadium renovations '74-'75.