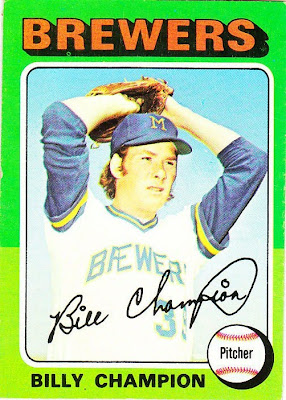 Card fact: I will take a chance and say this is the first card in the set in which the player's signature features not one circle for the "I," but two circles.

What I thought about this card then: I had this card and thought he looked vaguely "womanish" but not enough to add it to the "dude looks like a lady category."

What I think about this card now: Billy Champion's card was featured in my post on players who underwent 1970s metamorphoses. He displayed quite the change between his 1974 Topps card, and this card, and his 1976 card. Also, he has one of the great names for a professional athlete.

Other stuff: Champion was both a starter and a reliever for the Phillies and the Brewers from 1969-76. His only winning season came in 1974 when he went 11-4 for the Brewers.

Champion later became a scout and coach. He is now the pitching coach for the Uni-President Lions, a perennial power in the Chinese Professional Baseball League. 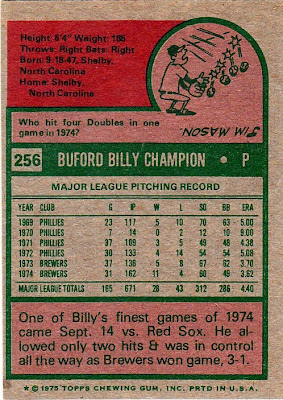 Back facts: Jim Mason's feat was also mentioned on his own card in this set.

Other blog stuff: Among the more notable baseball occurrences on this date:

1853: The New York Clipper publishes what is believed to be the first tabulated baseball boxscore.
1897: Cap Anson becomes the first ball player to accumulate 3,000 hits in his career.
1902: John McGraw begins his 30-year stay as New York Giants manager.
1920: Babe Ruth becomes the first player to hit 30 home runs in a season.
1985: The National League wins its 13th All-Star Game in 14 seasons behind LaMarr Hoyt's pitching.
1990: Steve Lyons slides head-first into first base to beat out a bunt, then stands to brush away dirt by absent-mindedly dropping his pants.

Also on this date, a baseball fan was born. It's my birthday today. I plan to celebrate by watching some baseball.
Posted by night owl at 12:45 AM

So basically, not much important happened except your birth and Lyon's dropping his pants. Happy Birthday (again!). I hope it's a good one.

I finished my 1976 Billy Champion post a couple of days ago. When I saw this post I altered the post schedule so that the '76 card would go out today. It's interesting to compare the cards.

Have a great day my friend....

When the Phillies acquired Steve Carlton prior to the 1972 season, I predicted (to myself) that Carlton and Champion would make a good one-two punch in the rotation.

It's a good thing I'm not a professional scout!