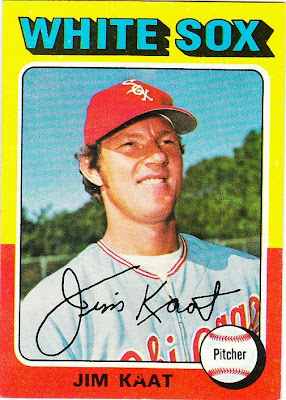 Card fact: I'm stumped for facts on this card. I will say that Topps did a pretty good job getting a photo of Kaat in a White Sox uniform in his 1974 card as he was acquired off waivers from the Twins in August of 1973.

What I think about this card now: It looks freakishly large.

Other stuff: Jim Kaat was one of those few major league players who played in four decades. When he retired, he held the mark for the most seasons in an MLB career for a pitcher. That, and his tremendous fielding ability -- he once held the record for his position with 16 Gold Glove awards -- were his on-field claims to fame. He also won 25 games for the AL champion Twins in 1965.

At this point in his career, Kaat was known mostly for his association with one organization -- the Senators/Twins. But he was let go by Minnesota in 1973 and the White Sox picked him up. Kaat proceeded to record back-to-back 20-win seasons for Chicago. But the White Sox then traded him to the Phillies after 1975. That's when Kaat began to bounce around from Philadelphia to the Yankees to St. Louis.

Kaat later became known for his broadcasting. He was an announcer for CBS and ESPN as well as the Twins and Yankees. I know him for his time with the Yankees. He was the voice of reason, along with Ken Singleton, that balanced out Michael Kay. Sadly, Kaat has retired from regular broadcasting, but Kay is still going.

One last thing: Kaat always looks amused. I like that. 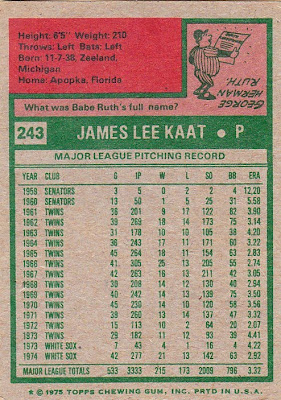 Back facts: Kaat pitched for nine more years after this card came out. How would have Topps fit nine extra years AND the cartoon onto the back of this card?

Other blog stuff: I'll just show the regular card and the mini card side-by-side. That's always fun. At least for me. 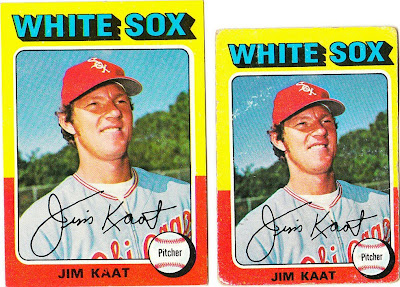 Do you think the veteran's committee will ever vote Kaat into the HOF?

Yes, and Kaat achieved 4-decade status legitimately, not like that fraud Minnie Minoso (or Tim McCarver, who broadcast Phillies' games for all of 1980, then suited up in September to play his 1 game!)

Why did McCarver make that brief comeback in '80? Was it solely to become a four-decade player? McCarver actually played in six games, not one, although most of them were bunched towards the very end of the season. McCarver signed on Sept. 1, but he only played in two games before Sept. 24. Four of his six appearances were between then and the end of the regular season on Oct. 5.

What's really interesting about this, though, is that the Phils were locked in a tight pennant race. They started September in a tie for first in their division, ended up winning by one game, and were never ahead by more than 2.5 games during the period McCarver was there. McCarver actually played a key role in winning one game.

McCarver's first four appearances were as a pinch hitter. The first two look run-of-the-mill (the Phillies were way behind in both games), but on Sept. 24 he pinch hit in the bottom of the 10th inning of a scoreless tie against the Mets with no one out and a runner on first. He executed a sacrifice bunt to move the runner over to second, then the next batter (Pete Rose) drove the runner in from second to win the game. This was an important win for the Phils, and McCarver actually played a role in winning the game. It may be that the Phillies only used McCarver because the game was in extra innings and they had already used all of their regular pinch hitters, but still, he came through.

On Sept. 29, McCarver pinch hit in the bottom of the 14th inning of a 3-3 tie against the Cubs, with one out and a runner on first. He grounded into a double play to end the inning. The Phillies ended up losing the game 6-5, in 15 innings.

McCarver's last two appearances were less crucial. On September 30, he entered a game against the Cubs at first base in the 8th inning. The Phillies were losing 14-2 at the time (which turned out to be the final score). He finished the game in the field without coming to bat.

McCarver's final game was on Oct. 5, the final game of the regular season. It appears to me that the Phillies had already clinched the division before this game was played, as going into it they had a two-game lead with one game remaining. McCarver entered the game in the third inning as a pinch runner for 1st baseman Pete Rose. He stayed in the game playing first, remaining there until he was removed as part of a double switch in the ninth inning (at which point the game was tied; the Phils went on to lose in extra innings). In three plate appearances, he went 1-for-2 with a two-run double and two runs scored, reaching base on error in one of his PAs.

McCarver had played fulltime for the Phillies through the end of the 1979 season, and then joined their broadcasting team for the 1980 season.

When rosters were expanded on September 1st, McCarver was added.

What purpose could it have been for EXCEPT to give him playing time in the 1980s? He was approaching middle-age and hadn't played all season. He could never run well anyway, and didn't catch while called up that month. I remember him playing 1st base in the last game of the season. (When the Phillies clinched the division in the next-to-last game, all the scrubs were put into the lineup for the last game.)

It made no sense to use him to pinch-hit. The Phillies outfield was Luzinski/Maddox/McBride, so Lonnie Smith, Del Unser, and Greg Gross were certainly more serviceable pinch-hitters than an aging, rusty McCarver. Add to them Luis Aguayo, Ramon Aviles, Keith Moreland, (and I think Dick Davis or George Vukovich was also on the bench).

This was purely a grab at some fame. As a veteran, McCarver should have had more respect for the game than to be part of a stunt like this. It's bogus for him to be in the 4-decade category (along with someone like Ted Williams)!