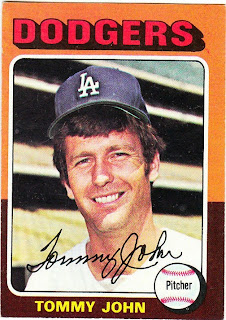 Card fact: This is Tommy John's last card prior to undergoing "Tommy John surgery." In 1974, John's left elbow gave out and his season was over. He was the first pitcher to undergo ulnar collateral ligament reconstruction, a revolutionary procedure developed by Dr. Frank Jobe. John ended up pitching for 14 more years. Thirty-five years later, this surgery has saved almost 100 major league pitchers' careers.

What I thought about this card then: I didn't see it. But John reminds me of just about every adult man I knew when I was a kid. All of my dad's friends and co-workers seemed to look like him.

What I think about this card now: John liked wearing that high cap, trucker-style. The anti-Joba cap.

Other stuff: Why isn't the surgery called "Frank Jobe surgery"? He's the guy who started the whole thing.

Also, we have seen three Dodgers so far. All have featured orange and brown borders. Hey, at least it's not pink. 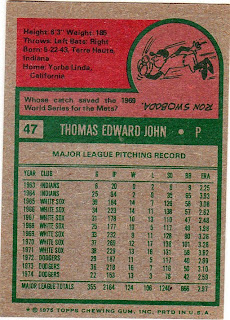 Back facts: The cartoon question could be interpreted incorrectly that Swoboda's catch kept the Mets from losing the World Series. Actually, the Mets were ahead in the Series 2 games to 1 and Swoboda's catch merely killed an Orioles rally in the ninth, helping the Mets win Game 4 in the 10th inning. The Mets would win the Series in Game 5 the following day. A very key catch. But it wasn't a do-or-die situation.

Also, you can see by the stats the kind of season that John was having when he suffered the season-ending injury. He had 13 wins by July 12th! I always wondered who took John's place in the rotation after the injury. I just looked it up and it was a young Geoff Zahn, who went on to have success with the Twins and Angels. He finished out the season going 3-5.

Other blog stuff: Let's go with a birthday today. Former Yankees pitcher Ed Yarnall was born on this date in 1975. Who is Ed Yarnall? He is the answer to this trivia question: who was traded for both Mike Piazza and Mike Lowell? Yarnall was in the trade that sent Piazza from the Marlins to the Mets. Later he was in the trade that sent Lowell from the Yankees to the Marlins.

Yarnall pitched a mere 7 games in the majors.
Posted by night owl at 1:23 AM

I think "Tommy John" sounds better than...who was that other guy? Anyway, I think it's a shame so many younger people only know the name Tommy John because of the surgery. Ed Yarnell was also traded to DrewCards....I was unfortunate enough to pull an auto of Ed's several years ago and unloaded in on Drew.

1st up - Great Trade comment by Play at the Plate.

I remember reading somewhere that some current player thought that Tommy John was the name of the Surgeon that originally performed the surgery.

I also read that former Phil Mike Williams thought that Babe Ruth was a fictional/mythical character.

How could you not know who Babe Ruth was???

In the early 70s I thought Johnny Bench was the place kicker for the Iowa State University Cyclones football team. True story.

When I finally figured out who he was (1975 WS) he became my favorite player and the Big Red Machine was my favorite team.

I know that doesn't have anything to do with Tommy John, but it kind of follows the thread.