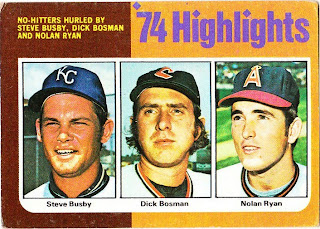 Card fact: This is the only card in the set to feature three individual photos on one card. Fascinating, huh?

What I thought about this card then: Never saw it. The interesting thing is that in 1975 I was more aware of Dick Bosman than I was of Steve Busby or Nolan Ryan. The reason for that is I received 100 percent of my baseball knowledge in 1975 from my baseball cards. And I owned a Dick Bosman card. I did not own the Busby or Ryan cards.

What I think about this card now: If you were a Steve Busby fan (and, surprisingly, I knew one when I was a kid), this was your only chance in 1975 to get a card featuring Busby, because Busby wasn't featured on his own card! (More on that when card #120 comes along).

Also, this is almost a throwaway "highlight." No-hitters are cool and all, but there are two or three no-hitters most years. You don't see them commemorated in card form every year. 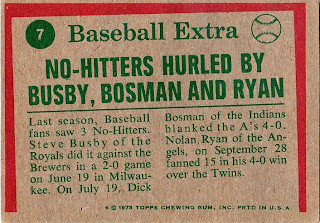 Both Busby and Ryan threw no-hitters in back-to-back seasons. It was Bosman's first and only one.

Other blog stuff: We have reached the end of the highlights! New, pretty colors coming up!
Posted by night owl at 12:36 AM

I can't believe I just noticed this blog tonight. I'm looking forward to this one.

This has Texas Rangers written all over it.

Steve Busby was one of the TV broadcasters for the Rangers from 1982-1995 and has done radio post-games shows for them as well.

Dick Bosman came to Texas with the Senators back in 1972 and stayed for part of 1973 as well. Later he was the Rangers pitching coach for 6 years.

Nolan Ryan pitched for the Rangers from 1989 to 1993 and is the current team president and is rumored to be involved with a group who wants to buy the Rangers.

I like the "highlights" subset. Topps should do something like that every year. Maybe they could expand it and do a "team highlights" subset -- one card for each team. Even teams like the Pirates and Nationals would have at least a couple of highlights.