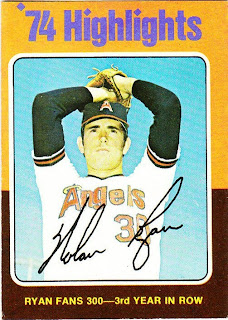 Card fact: Nolan Ryan appears on a card four times in this set. I'm looking this up late at night, so I could have missed something, but he's the only one with four cards in the set.

What I thought about this card then: Again, one of my brothers had this card. I'm not sure which one. We didn't have an inkling of who Ryan was. We did think "Angels" was a meek name for a baseball team. We were glad our favorite teams weren't called the "Angels," but named after more masculine themes, like colorful birds, and socks, and people who didn't want to be run over by trolleys.

What I think about this card now: I believe this is the first time that Ryan is pictured on a card in which the photographer shot him from underneath, so that Ryan appears bigger than he is. But it certainly wouldn't be the last time. Ryan may have been the subject of more "hero shots" than any other player. The guy was practically a god by the end of his career.

Other stuff: The signature on this card is much larger and has much more of a flourish than on Ryan's regular card. Just thought you should know. 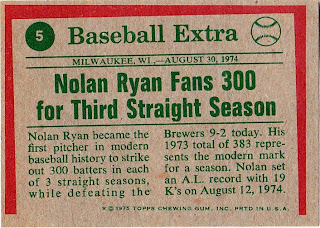 Back facts: This card eschews the "all caps" style for the headline, unlike the earlier cards, probably because Topps couldn't fit what it wanted to say in the headline using all caps.
I looked up the game. A whopping 7,727 people came out to County Stadium to watch Nolan Ryan that day. Ryan struck out nine. Batters, not spectators.
Other blog stuff: The No. 1 song on this date in 1975 was "Bad Blood," by Neil Sedaka. That's the kind of nonsense you'll be subjected to when I don't have any new blog stuff to relate.
Posted by night owl at 2:36 AM

"We were glad our favorite teams weren't called the "Angels," but named after more masculine themes, like colorful birds, and socks, and people who didn't want to be run over by trolleys."