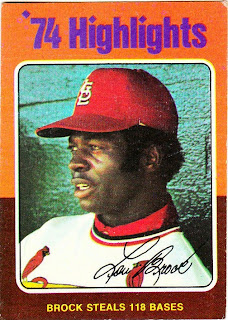 Card fact: We have quite the 1-2 punch with a card commemorating a new career home run record followed by a card recognizing a new single-season stolen base mark. I'll follow up on that in a little bit.

What I thought of this card then: Unfortunately -- and this will come up again and again -- I never saw this card when I was buying packs in 1975. Lou Brock was just one of those names floating in the ether. I had a vague sense he was a big deal, but I didn't realize how big until I read this book: 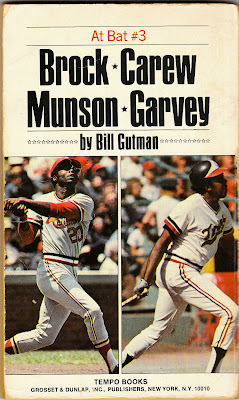 This was the first baseball biography I ever read. I was 11 or 12. Obviously, it meant enough that I have kept the book. It made an impact, because each of the 4 bios were very thorough and well-written. The Brock bio goes into an illustrative background of his poor childhood and the shame he felt growing up an African-American in the south. But the item that stuck in my mind as a kid was Brock recounting an incident with Mets catcher Jerry Grote.
Brock always had trouble stealing successfully against Grote. Then, one day when the two teams played each other, as the story said, "things changed":

"Grote walked past me before a game, and I said hello to him," Brock recalls. "He either didn't hear me or was ignoring me so I said hello a second time. Again he didn't answer. So I screamed at him, 'Hello Grote!' That seemed to bother him, and he was still upset about it when I came to bat. So when I got on I began screaming again. 'Grote! Grote! Grote!' He wanted me to go, of course. So I went. And I finally beat him. Since that day I've run at about a ninety-percent efficiency against him."

As a kid, I thought that story was hysterical. I must have repeated it to five or 10 different people after I read it.
What I think of this card now: Well, other than it's a very static shot for a card that honors the new single-season stolen base king, I noticed one thing for the first time.
I began to think about how there was two epic events during the '74 baseball season by Aaron and Brock, and then I thought about how Topps very rarely issued cards commemorating moments from the past season, unless it was the postseason. In fact, I can't think of a single year prior to 1975 in which there was more than one card honoring the past season's events, aside from World Series cards.
That interested me, because when I first started collecting, "highlight" and "record breaker" subsets were a fact of life. They would appear in every set every year during my formative collecting days. And then it occurred to me: Aaron and Brock triggered that trend. Topps looked at those two giant moments and thought, "We HAVE to recognize it in the card set next year." And they came up with a 7-card "Highlights" set. And that trend continued for years after that.
Other stuff: Hell, I've prattled on long enough. There is no other stuff. 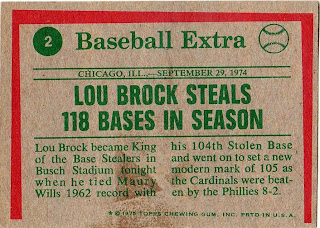 Back facts: Nice gum stain, huh?
Topps follows the newspaper headline rules on this card, but it commits another gaffe. Actually, it's more misleading than an outright mistake. The date mentioned is Sept. 29, 1974. That is the date that Brock stole his last base of the 1974 season, his 118th base of the year. But the write-up mentions him stealing bases 104 and 105 in Busch Stadium, which happened on September 10. So you've got a dateline of Chicago, Ill., followed by a write-up that says Brock set a record "in Busch Stadium tonight." Huh? Did they move Busch Stadium to Chicago?
Yeah, I'm an editor. Deal with it.
Other blog stuff: I've decided I will show some of the '75 mini cards I have, but not all of them. Scanning the fronts and backs of 660 cards is enough, and the minis look just like the regular cards except for one small difference (heh). But don't worry, you'll see some of them.
Posted by night owl at 2:05 AM

I agree with you about the choice of a "static" shot for the stolen base king. Is he in a Lazy Boy in that pic? I can't tell. At least he's not smoking...