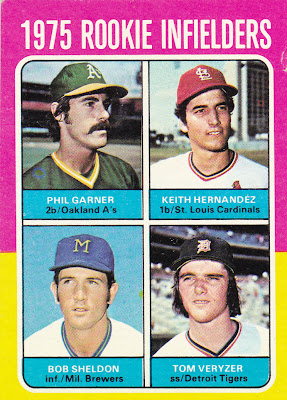 Card fact: I'm trying to determine whether Phil Garner is airbrushed into an A's cap and uniform. Something doesn't look quite right, but Garner came up with Oakland. Perhaps he is actually wearing a minor league uniform. He played in Tucson most of the 1974 season.

What I think about this card now: Keith Hernandez looks like a whole other human being. Tom Veryzer is definitely a "dude looks like a lady" candidate.

Most successful career: If you combine "Scrap Iron" Phil Garner's playing career with his managing career, he has an argument. But Keith Hernandez easily is the best of the four players. 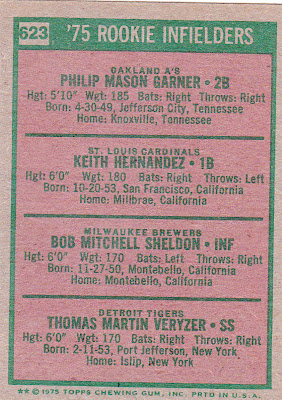 Most awesome middle name: For the first time, we have a player without a middle name on these rookie cards. That was always awesome to me, so I'm going with Keith Hernandez.

Other blog stuff: The pink-yellow border combination has tied the orange-brown and green-purple combinations for the overall lead with 52 cards each.
Posted by night owl at 12:21 AM

Should I be worried that my first thought when I saw the card was the Veryzer was a "dude looks like a lady" guy? I think so.

There is an error on this card. It says that Keith Hernandez bats right.

Dude Looks Like King Richard III. Seriously. I'm sure if you Google Richard III's image you'll see what I mean.

Hernandez looks a bit like Jerry Seinfeld in that pic, which is funny given his guest appearances on his show.