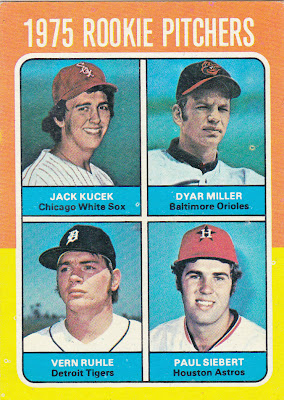 Card fact: Welcome to the rookie portion of the '75 Topps retrospective. Sometimes called "rookie stars," sometimes "rookie prospects," Topps took the understated route in 1975 and merely described the players by their respective position.

This was the period when Topps featured four rookies on one card, which is the format that I know and love best. Topps went with this format from 1974-1978. After (and before), Topps featured three or even two rookies per card.

What I think about this card now: That is a lineup of mediocrity right there.

Other stuff: For the rookie cards, I thought it'd be interesting to note what each player's first solo card was -- if they ever had a first solo card.

Most successful player: Vern Ruhle, who had cards every year from 1975 through 1987 and was later a longtime pitching coach. Unfortunately, he's also the only deceased player of the four. 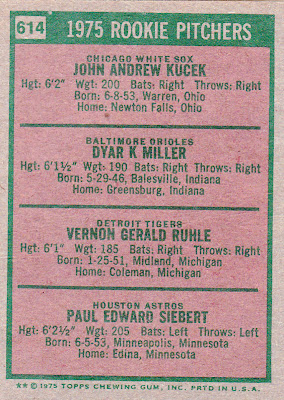 Most awesome middle name: Dyar Miller has a "K," baseball scorekeeping shorthand for a strikeout, as his middle name, and he was a pitcher. That is fantastic.

Other blog stuff: As you can see, I'm mixing it up a little bit for the rookie cards. I'm not going into detail about the players, because that's really too much work. Hope you like it.
Posted by night owl at 12:11 AM

Are any of those guys airbrushed into caps? I like the format and I think seeing when, and more importantly if, they had a solo card will be telling. Telling what? I don't know.

Dude! I can't believe you wrote ;

"Unfortunately, he's also the only deceased player of the four"

if something happens to the other three anytime soon.... they'll be looking for you. get an alibi or something.

Dyar Miller is an interesting player. The Phillies signed him as a catcher in 1968, but he switched to pitching early on. He was 29 when he finally debuted with the O's in 1975.

It looks like Kucek and maybe Siebert are airbrushed. I'll add it to the labels.

I just noticed Topps used the same Kucek picture on the 1975 and 1976 cards. We used to make fun of this card since Kucek looked like a cartoon character