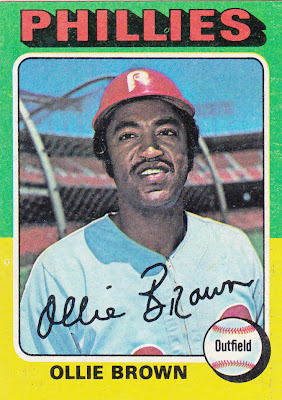 Card fact: This is Ollie Brown's first card as a Philadelphia Phillie, the last of his six major league teams. He is airbushed into an Angels cap in the 1974 Topps set.

What I thought about this card then: It was a mild favorite. When we would go to my grandma and grandpa's house on Sundays, they were able to pick up the Philadelphia Phillies games on television (we couldn't do that where we lived even though we were only 13 miles away). I distinctly remember seeing Ollie Brown in one of the games.

What I think about this card now: It looks very similar his 1976 Topps card, except better. This one has Brown with a mustache, wearing a helmet and in front of a batting cage.

Other stuff: "Downtown" Ollie Brown began with the Giants, playing four years for them in the 1960s and demonstrating a terrific throwing arm.

The Padres made Brown their No. 1 pick in the expansion draft in 1968. He was their starting right fielder for three-plus seasons before being traded to the A's in May of 1972 (for Curt Blefary and Mike Kilkenny).

Brown spent the next three years with the A's, Brewers and Astros, mostly in a supporting role. He was picked up on waivers by the Phillies before the 1974 season and used quite a bit as a pinch-hitter for Philadelphia from 1974-77, including in the playoffs against the Dodgers.

Brown's brother Oscar played for the Braves in the early '70s. Another brother, Willie, was a star running back for USC in the '60s and played in the NFL with the Eagles and Rams. 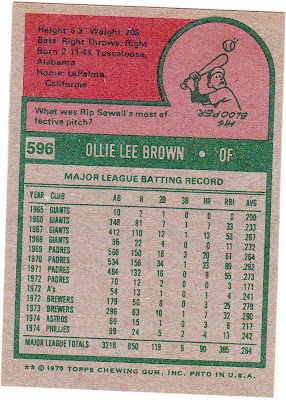 Back facts: Not much to mention except it sure would be great to see the blooper pitch back in baseball.

Other blog stuff: The green-yellow border combination is heavy on the head-and-shoulders shots for some reason. The last nine cards with that color border have been head shots, some of the super-tight variety. And there are some other notable head shots preceding the previous nine. Just thought you should know.
Posted by night owl at 12:20 AM

We can't let Ollie go without a comment. I can't decide if he looks happy or constipated.

After reading his stats, I'd say he's happy. He hung around a long time and had some decent seasons. He was gone before I started watching baseball and that's one of the reasons I like this blog. I get to see some guys who I never heard of and probably wouldn't have otherwise.