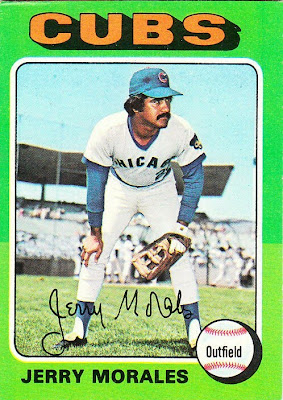 Card fact: One of the things that I have not mentioned about this set yet is the position designation, which is displayed on a baseball graphic. The type in the baseball is often not centered, as on this card.

What I thought about this card then: This is one of a group of cards that I received in a trade with a friend. Because of that, I still associate the card with my friend, as if the card is still his, as if he first discovered the card. Funny how the brain works.

What I think about this card now: It's kind of a cool photo. Jerry Morales posing in front of the distant grandstand, while looking off to the side. Very nice.

Other stuff: Morales began for the fledgling Padres, but was traded to the Cubs, who were undergoing a youth movement at the time. They got rid of Fergie Jenkins and also traded Glenn Beckert to the Padres for Morales.

Morales enjoyed some decent seasons for the Cubs. He hit fairly well and had a good glove. He was later traded to the Cardinals and then bounced around between St. Louis, Detroit and the New York Mets, before returning to the Cubs as a role player.

Morales has spent much of his post playing career as a coach, both in the major and minor leagues and in his native Puerto Rico. 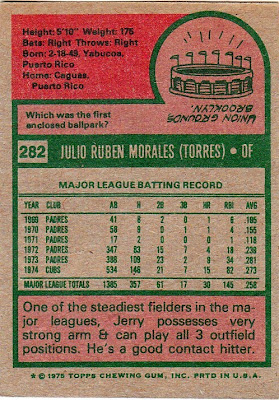 Back facts: Union Grounds in Brooklyn was a ballpark bordered by three streets and a fence, allowing the teams that played there to charge admission. It was the home of the Brooklyn Eckfords of the National Association of Base Ball Players, among other teams.

Other blog stuff: Here is the card that I received from my friend in that trade: 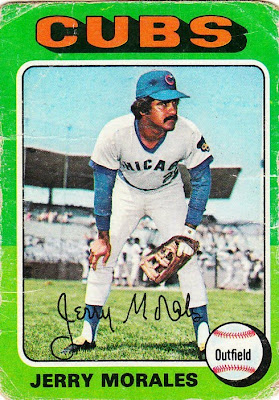 It was in much better shape when I traded for it. Still, it doesn't look too bad!
Posted by night owl at 2:09 AM

Was that picture taken at Dodger Stadium?

Ah..the good old Brooklyn Eckfords. Seriously though, he wasn't a bad player. I hadn't heard of him before, but he did put up some ok numbers. Thanks for "introducing" him.

that has to be a spring training photo.....i count 5 players in the background....i suppose they are all cubs, but the blue looks black from a distance